Welcome back to the blog and Happy Halloween! I am very excited to announce that I finally located and purchased two of the 3 missing parts for our truck which have kept me awake at night since the truck arrived at the Museum- a Carbide gas generator and Klaxon horn! I’ll be covering the horn in detail in this post.

Now, I know what many of you brass-era enthusiasts might be thinking: ‘Ian, that’s a motor cycle horn and not a car horn’. Well, you would be right. Except, that its also the type of horn used on the Liberty trucks and differs slightly from electric motorcycle horns of the time period that closely resemble it. In the many  photos I have scanned through as well as surviving examples, there are two types of horn used- the short bell, rear-push ‘Hand Klaxonet’ style horn appears to be the most common which is also the style that the trucks left the factory with. There was also a long-bell version which looks more like the standard truck horns of the era and is also outlined in a government contract photo from the National Archives as a ‘Class-B truck horn’. This however appears to be in the minority. 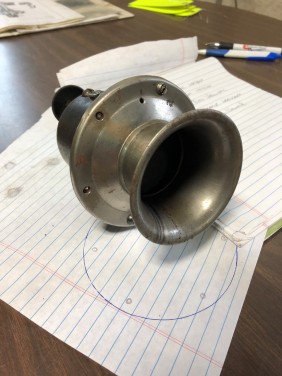 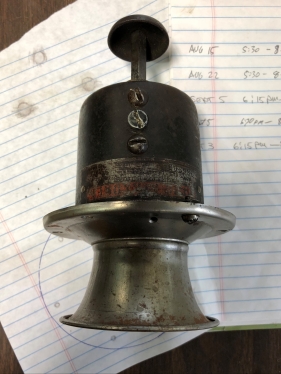 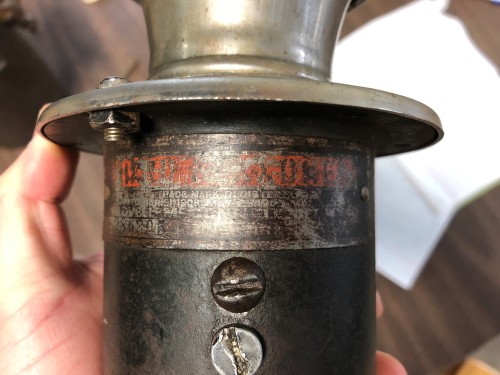 The rear-push short bell ‘Hand Klaxonet’ style is the more common of the two and I managed to find one in (very loud) working condition on eBay a month or so ago for around $250. All that remains now is to clean it up a little and paint it to match the truck as was commonly done. I have also noticed that there appears to be a small screen placed inside the bell on some horns in museums. I have not been able to verify if these screens were ever on issued horns at the time, but at the moment it appears to be a post-war feature as most photos show no screen. Our Klaxonet is an original body and mechanism with a reproduction bell. The reproduction bell was actually a large factor in buying is as I felt it was in very nice shape and also helped to reduce the cost slightly from others I had come across. It appears to also be missing several of its 6 retaining screws which affix the bell to the body. These can be easily replaced with new flathead screws and nuts. These screws are also integral to mounting the horn to its bracket.

And there in lies our next hiccup: we have a horn, but no mount. A mounting bracket was one of the few items we were never able to find in all the parts trucks we accumulated over the last decade. We have been carefully studying period photos, as well as photos we have taken of surviving examples such as the truck at the Fort Eustis Transportation Museum and US Marine Corps Museum at Quantico, VA. While we are unsure if these brackets are original, they appear to be so and are also some of the few photos we were able to get close enough to potentially replicate as most original photos are nearly impossible to get a complete walk-around view of. A small pixelated scan of an original manual shows a similar mount but only from the side- this would appear to indicate that this style was in fact original. It appears to be stamped steel and bent after stamping, making it easy to replicate.

There is also a mount outlined in the contract photo of the long-bell horn made for ‘Class-B trucks’ under contract for the government. This mount however would not fit the holes already present in the firewall of our truck which remain from a previous horn mount. At this time our money is on the mount style encountered at the Fort Eustis Museum simply because it is of a style which would better perform given the rear-push style of Klaxon horn used and brace the horn best from rear-applied force.

I want to thank Will ‘Adrian’ Winget for providing some very helpful information regarding horns and bracket images for this post. Stay tuned for more posts in the future and coverage of the other new part we finally tracked down that our truck was missing- a Carbide gas generator!