We knew that this old beast was going to test our knowledge and skills right from the beginning of the project. Already, we learned that manuals were scarce, only photocopies floating around. To add to that problem, parts were even more rare since many of these trucks did not survive. On top of all that, this little princess was not at her very best. She weathered many long years without a makeover and a full spa treatment was in order.

The arrival of our first Liberty Truck in October 2007

Relocating the rear-end and removing the added frame section. 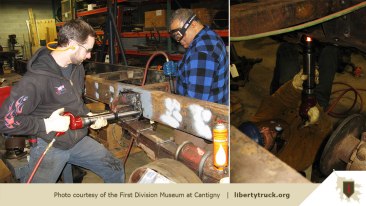 One of our first and very challenging tests was correcting the length of the frame. Prior to truck coming to us, it was used West by a mining company. During its tenure there, the truck was beefed up and the frame lengthened.

To correct everything, we removed the 3/8” steel sub frame (which was riveted on) and filled the holes … that was the easy part! The real test was correcting the foot and half lengthening of the frame. It sounds easy, but when the mining company lengthened the frame, they also moved the entire rear end of the truck back too. So it was on us to cut the rivets, relocate the springs/rear, remove the added frame part and attach everything back on. Not so bad … BUT … everything was riveted on. Now we could have taken the easy way out, but no, we already set on the path of taking no shortcuts. That means instead of using bolts to put everything on, we needed to learn how to hot rivet. Fun, Fun!

So Chris set off to learn how to hot rivet and brought the skill back to his team. After many attempts and lots of practice, we did our princess right. We took no shortcuts and hot riveted the entire rear-end. We brought back a dying art/trade and applied it to our restoration. Ultimately, as we restore this Liberty Truck, we are also learning the skills of the men that built these vehicles in the early 20th century.